I love  the growly roar of a powerful motorbike ....what could make me enjoy a noise like that?
Perhaps it was because when I was young the infamous aunt, Helen, took me north on the train to the seaside town of Portrush up on the Atlantic coast of north Antrim. There the North West 200, if I remember correctly, was held every year on the narrow roads of the county. Possibly still is!
Aunt Helen worked for a firm  servicing and selling  Daimler cars,Norton bikes and David Brown tractors. A woman in a man's world in those days....and fiesty with it! The company also owned the greyhound racing track and the speedway track in Belfast..... but that's another story and nothing to do with Ballyferris so I mustn't get sidelined !
Anyway, I  really loved the eardrum-splitting noise of the engines as they screamed around the track on the roads of Co Antrim. And lying on my stomach on the top of a roadside verge with my nose literally inches away from the gloriously smelly monsters  I was absolutely unable to hear anything aunt Helen might say to warn me to be careful...what did I know of danger!

So ...now...to have  motor bikes speeding past at the top of the lane that lead down to the caravan field at Ballyferris... in a race...was delicious joy!.
The Carrowdore 100.
Called that as the bikers started from  the little town of Carrowdore and filled the roads along the shores of the Ards Peninsula with noise, dirt and the smell of oily excitement.
. Not raced over as many miles, and perhaps not thought of internationally, quite as important as the North West 200, but it was ours and we made it a day to remember.
A farmer's field was always set aside for the riders and their growling steeds.We made it our job to be there in the field  where those tough men in their leather biking gear, their scuffed boots with many straps and buckles and unnumbered unknown acoutrements, had our eyes popping out of our  heads...and our hearts beating wildly with excitement....wondering...what could all the gear be for?
The smell of  the hot engine oil,  the sound of  never ending accelerator noise as they prepared and rode up and down the field waiting for their race, waiting for the signal that summoned them to the starting line, had us jumping with excitement. 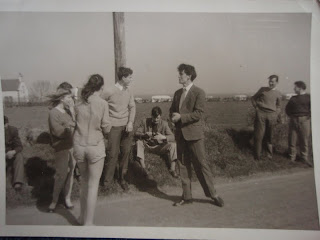 As townies we always hung around with the farmers' lads, they knew many of the riders by name. And if you were lucky there was a possibility of  getting up close to one of the bikes or even being allowed to sit pillion behind one of these "gods of the road".... though may I must tell you, sadly, it was not ever my fortune to be chosen!

Such innocent days. Yet, in that little tucked away spot of nowhere, death and tragedy struck most years.
As in the Isle of Man T.T. races nowadays, young men died, striving to be the first to cross the line and win the accolades from those who stood around them adoring! I don't think the fear of dying was ever as strong, is even now as strong, as the love and longing for excitement and danger.

At the end of the races we trudged down the lane towards the sea and gathered in one of the caravans ...excited, noisy and smelling of  fast engines and fresh air. A wonderful combination! The noise was still going on in our heads......zoom...zoom...zoom... while outside the windows of the van, the grey Irish sea whooshed us into a quietened state.
The last death stopped it all. Now there is no more Carrowdore 100.
I 'm sure this is right... and yet... those "magnificent men on their racing machines", and the
memory of the noise and the smells, went into the rest of the mix which made my teenage years only ever more memorable.