I googled the word.....algorithms...I was fed up with being told by the younger set, that my life is now set because of all my choices on the internet going into some vast drum.....stirred around and then emerging on the iPad screen as something that I have always wanted.

Well guess what ...old Euclid knew about algorithms... and I don't think he had bought his iPad by the time he wrote it down.

Anyway...Algorithms...was my prompt today for The Bold Street Writers in Warrington. And the results were as usual amazing. From a carefully worded account of the inner doings of Amazon ...if you want to sell your detective novel....to a run down of the latest news and gardening programmes. Don't ask...just believe they were great.

Mine?....well all about why I now have two kittens living with me and the potter. It's a bit long but then it takes a while often for an algorithm to work out.

A sudden movement
Makes it real
In the garden by the hedge
An ice grey mother cat
With two small kittens
[I've jobs to do and places to be]
She dashes from our sudden movement.

So it's true and we're astonished
One small tabby kitten lingers
Snapped a shot on
A mobile phone
Posted up on face books news
[what about my jobs and places?]
Makes it real.

Frozen on the mobile phone
A tabby's image   tiny image
Next a plethora of messages
Demanding that they be consulted
"We will come and take the cats"
[thinking of my jobs and places]
Close down local face book page
Delete it from the mobile phone.

Tabby's image small and frightened
Enter Kat from  animal  rescue
Brings her cages
Traps the kittens two, now three
And the pretty mother cat
Takes them off to safer havens
[I'll get on with jobs and places]
Tabby's  image lingers on.

Message sent to animal rescue
Kept the contact
How's the family?
But I really want a greyhound
Want a whippet, or just a mongrel
[do the daily jobs as needed] still
Can't ignore the tabby's image
Message Kat from local rescue.

Glad now that I kept the contact
Can I have the kittens back?
[did some jobs of sorting rooms
Did some buying for the two]
September comes October goes
November's bleak, and Christmas shines.
Cats are coming early January
Glad I kept the rescue contact.

Now we have the kittens back
I forget about the whippet
Pretty female, dancing tomcat
And the potter is besotted
Who'd have thought it
He's the daddy, playmate, teaser
[I get on with jobs, go places]
Happy that the cats are back. 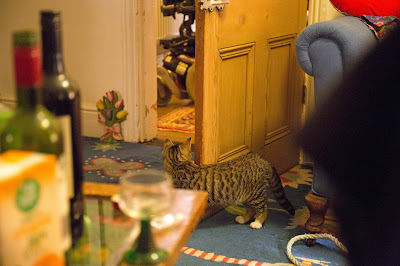