When I told my mother I was getting married to the man who is now my husband....she tutted and commented that it was a real shame to lose my surname for the name...Snape.

She said it had no poetic ring to it.

I kept my Ulster name for a while and double barrelled with Snape.
Geraldine McClelland- Snape
What a mouthful.
I soon got rid of that.

Then I found out that a snape is an old english word having two meanings.
v.
also sneap, "to be hard upon, rebuke, revile, snub," early 14c., from OldNorse sneypa "to outrage, dishonor, disgrace," probably related to similar-sounding words meaning "cut" (cf. snip (v.)). Verbal meaning "bevel theend (of a timber) to fit an inclined surface" is of uncertain origin orconnection. Snaiping "rebuking, reproaching, reviling" is attested fromearly 14c.

English and Scottish: habitational name from any of various places in England and southern Scotland, for example in North Yorkshire near Bedale, in the Lowlands near Biggar, and in Suffolk, so named with Old English snæp ‘area of boggy land’. In Sussex the dialect term snape is still used of boggy, uncultivable land.
More than that I started going to Suffolk and regularly visited the village of Snape and The Maltings...where Benjamin Britten and Peter Pears set up the Snape Maltings Music Festival.
Wow....that made Snape even more attractive.
It didn't end there... oh no.
Next thing I discovered was that the last queen of Henry VIII...Catherine Parr.. lived and married second time to John Neville 3rd baron Latimer...in Snape Castle in Yorkshire....well they say that's God's own county I hear.
I'm only an Irish woman so I'm believing what I'm told you understand.
Now...the potter and I have a little retreat up on the bay...that's Morecambe Bay...The Bay.
We started exploring the limestone bulge that surrounds so much of that lovely part of England.
Carnforth...Silverdale...Arnside...Milnthorpe
And one day I shout at the potter.."Look...Snape Lane ...lets go up there."

I've started taking pics of this magic little secret lane regularly as the seasons change.
We went on Sunday and these are the up to date snaps of it.
No white lines here.
Very little traffic...and how I love the way the fields have been given appropriate titles. 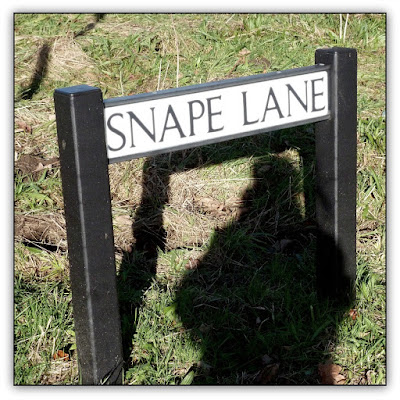 ...that's me and my shadow...Gerry Snape 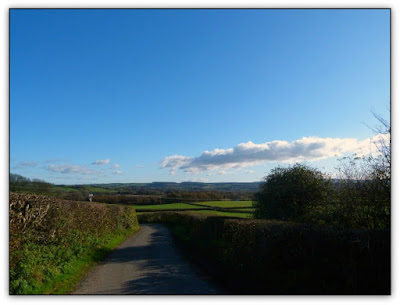 ...we stop at the first bend in the road to see the view over the countryside... 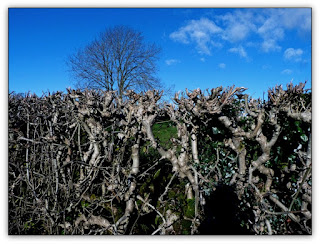 ...the hedges have been given their autumn coiffure...ancient hedges protecting even older stone walls...I think of Robert Frost's wonderful poem about dividing and protecting neighbours... 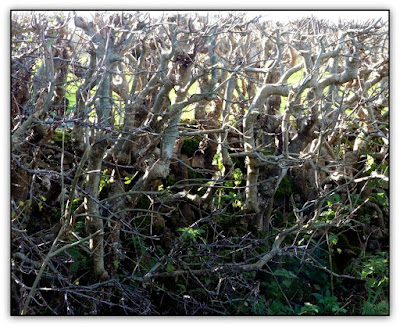 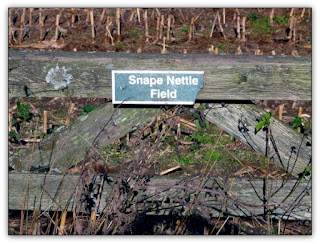 ...this was our discovery on Sunday...the naming of fields...my dad often talked about the names of the fields at his home farm in Armagh..it meant so much to him and he would recite them to us in our city lives... 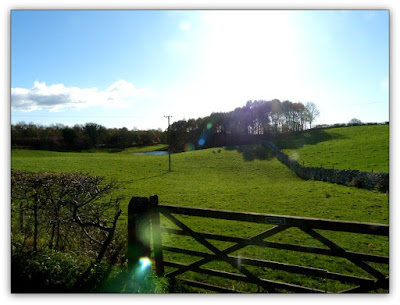 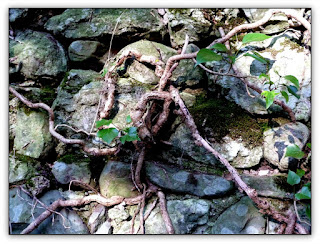 ..up into the top of the lane and the road is bounded by high stone walls covered in ancient roots of
ivy....I go to see what they have twisted around this year and gather the dead branches from the fallen leaves underneath... 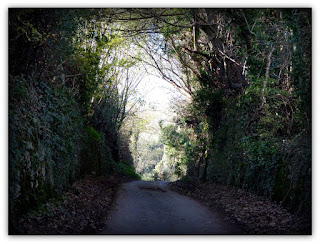 ...looking west to the top of the hill under the yellowing canopy of late autumn trees.... 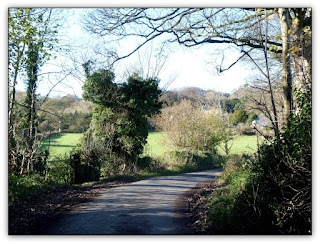 ...looking east back to where we have come... 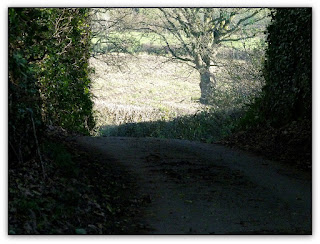 ...light and shade and a view through to old established trees... 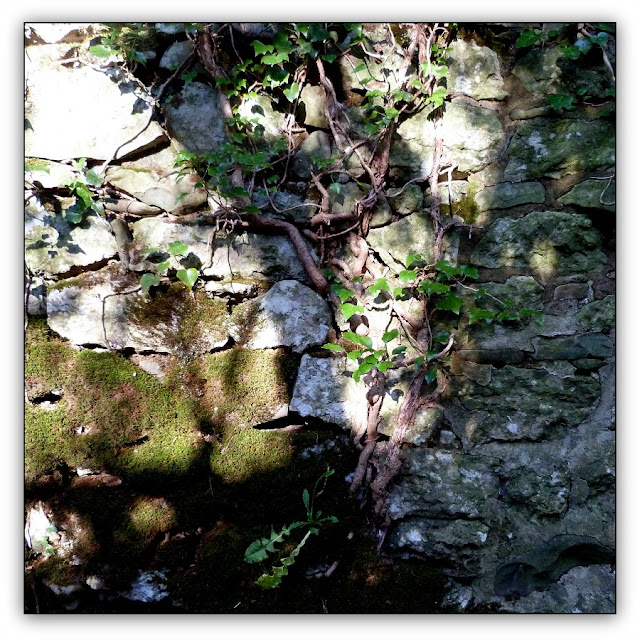 ...and sunlight filters through to light the ivy casting many blue shadows on the stones...

I can't write any poetry yet about this lane.
It's almost too much to think that way yet.
And I'm not giving you directions to get to it...it's secret.
Maybe one day.