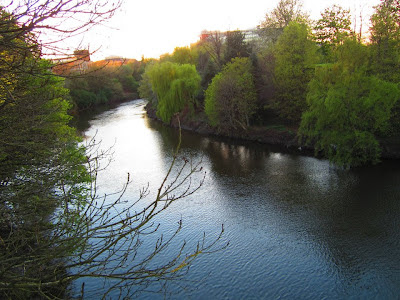 So...did old Lowry sit beside the fluss?
and did he think I'll paint that lot one day?
or did he only see the children run
barefoot across the stinking bank
toward their Salford homes
to pray for hotpot on the stove.

Did Lowry hear about the one who'd had enough
when times were thin and thinness was in vogue?
who sank into the mud and stayed in it
between the empty prams and beery glass?
is that the reason Lowry stayed so long
when he had reasons of his own to up and go?.

They called his people... matchsticks...that they were
such skinny children, all of them unknown.
they've planted trees now where there once were weeds
and the river's rancid  smells are sanitised.
proud Irwell once the Roman's northern fort
now has the cache of Lowry's tender daubs.

L.S.Lowry the painter lived in Salford near the Irwell River.
Today we took our granddaughter to see the art in The Whitworth Gallery, and passed by the River now all clean and pretty , My friend grew up within the shadow of the factory buildings that Lowry painted and knew the scenes as home.
Much of Lowry's work now hangs in The Lowry Gallery on the banks of the Manchester Ship Canal

I'm also adding this in to this week's poetry pub for dVerse.week 43...what fun!
Posted by Gerry Snape at 22:26