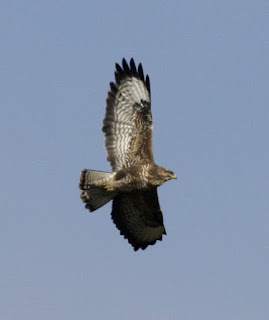 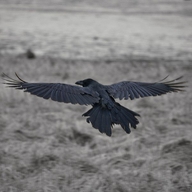 I'm in the kitchen preparing a pan of soup...home made, delicious tho' I say so myself...
...the potter is next door in the studio glazing puffins...a good seller by the way... 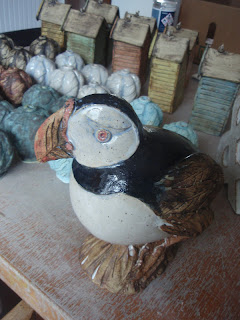 and then the kerfuffle and the screaming of the birds... a lot of noise and beating of wings.

I had put out the seed, worms and peanuts as usual earlier. Mostly blackbirds, robins and bluetits frequent the "stall!" Oh yes and of course, those fat waddlers of the field...the wood pigeons.
But now and again the magpies will swoop in and devour the lot.
So whether the buzzard had foolishly come over at the same time as the "mags"... I'm not sure.
But one of them had the buzzard by the throat and another had it by the leg and the feathers were flying
... and we were left gobsmacked ...as they say! 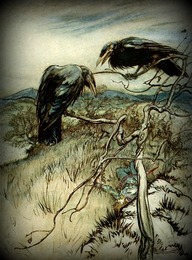 The pack of crows that nest in the highest trees down the field , had gathered on the tops of the bushes nearby... crawing and jumping up and down like mad things.
The rest of the magpies who normally compete with the crows ...had joined the throng and were flying and swooping down on the fight taking place on the bird feeding stall.

I wasn't sure where to put my money. At times, the crows will beat off the little birds, and of course the magpies eat their eggs and babies....such is the reality of lovely nature...I like that in a weird sort of way. Life everywhere is tough. I would say dog eat dog ...but it's more bird eat bird!

Anyway the potter must have had his money on the buzzard...as it managed to struggle free and flew off at top speed...ahhh... beautiful bird.

Excitement over..the craws and other birds settled down again up in the tops of the trees...well that is except for the seagulls who always circle overhead on the currents coming up from the Mersey which is close by. They continued to cry with their childlike "mews". Often an unearthly sound. 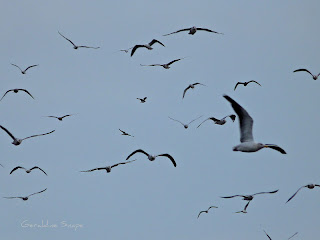 Years ago when the "blessed" Tom cat was in his prime, he too had taken on the magpies. 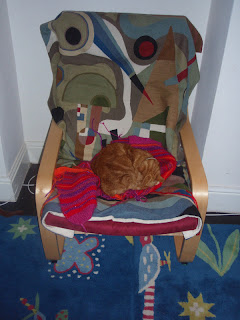 The fight was fierce, and once again all the other magpies gathered around and swooped at him as he taunted the bird in his mouth. Again, in that instance, the magpie got away and Tom made a dash for the bushes to hide until the furore was over.

Ohhh!  what an exciting life I do live!  All back to normal now...potter in studio...me at the keys and the sun starting to shine.